It’s a delight to share this conversation with the founder and owner of Bootlegger Guitar, Mr. Chuck Wilson.

HGB: So let’s start from the beginning. How did Bootlegger begin?

Chuck Wilson: I had a recording studio in Hermosa [Hermosa Beach, CA] and I started selling some guitars from brands that I’d been meeting at NAMM. I’ve always liked designing and drawing— for example, I’m involved in developing race cars. I can be creative in my mind but can’t weld well, you know. I can design it: “Here’s what I like,” and then give it to an engineer who can make it work. So I guess it was because of my connections with NAMM and meeting different builders that initially got me into the guitar sales business without myself building guitars.

HGB: Very cool! And how did the idea of the Spade guitar and Ace bass come about?

Chuck Wilson: I saw Johnny Winter perform, probably in the 90s, in Hollywood, and he played a white Erlewine headless guitar, which I loved… look up Erlewine guitars in Austin, Texas. My body shape is different. You know, I’ve owned and performed with numerous headless guitars. When I saw Johnny Winter play his— I guess we kind of get influenced by our gods of guitar, and he’s definitely one of them. And so I wanted to avoid copying Mr. Erlewine’s guitar, I wanted to do a Bootlegger guitar, took that headless idea and designed with my engineer’s help, the Spade. We’re on the third generation of it now. If you look at older ones, there’s differences in the body shape.

HGB: Interesting. So what was it that initially drew you towards the headless design?

Chuck Wilson: Growing up in the 70s, watching funk bands play headless basses, like, go back and look at early funk stuff. It’s just classic, man… the cool black dudes with a headless bass, you know. I have a lot of jazz influence. My uncle is Howard Rumsey, who was a jazz musician, and so I saw different guys play bizarre basses, and one of them was a headless bass. So I think it was really initially the headless basses that I thought could also be cool headless guitars. Then I went and built a headless guitar— and now I had to have a headless bass. It kind of went full circle.

HGB: So it was the guitar that came first, the Spade?

Chuck Wilson: Yes. I was scared to build a bass [laughs].

HGB: Why was that?

Chuck Wilson: Well, I’m a guitar player and bass players are different animals. A lot of my friends are bass players and I just thought, you know, if I fuck up a bass… I mean, it’s one thing to screw up a guitar, because I’ll know since I’m a guitar player. I could design and develop a bass and it could be crap, you know. And I’d just be like: “Oh that was a mistake.”

Chuck Wilson: Different animal. So until I got enough interest from my bass friends to help me design the bass, I wouldn’t. I just wouldn’t make something that’s not playable. But then I got plenty of help because they all liked the Spade so much.

HGB: What was the most important thing for you when you designed the Spade?

HGB: So what’s been your experience in terms of the interest in headless guitars over the years?

Chuck Wilson: I didn’t know when I first got it, and I put it [the Spade] for sale— I mean, guys dug it and it sold, but until it started being discussed as a “travel guitar,” that’s when it took off. Now, it’s kind of an insult to me [laughs]… because I didn’t design a travel guitar. It’s like, it’s not a travel guitar. But if it’s well-suited for travel— that’s fine. You know, in traveling to Europe with my wife, Mary, I have it with me. I can kick back and play it with headsets, you know when I need stress relief. I just need 20 minutes to play guitar. Or, I can find a blues jam in some city in Europe and show up with it and plug in, and I’m ready to go. I sure as hell wouldn’t take a toy travel guitar to some blues jam that I’ve been invited to. And I’ve done that. I’ve done it where I’ve gone to the local music store and gave him my card and said: “Hey, here’s the Spade,” “Oh, that’s so cool!” “Well, thank you.” “Why don’t you come to our jam tonight?” And, you know, when you’re a tourist, those things are priceless. Right? So you know, I walk in with a pro guitar instead of a toy… So yeah, I’ve carried that thing around the world.

HGB: Yeah, so you’ve flown with it quite a bit. Do you bring the Spade and put it in the overhead compartment?

Chuck Wilson: Yeah, I just carry it on. I usually travel with the gig bag. There have been flights I’ve taken, like really small planes, that hasn’t fit or didn’t have an overhead but I’ve never had a problem. The steward says “I’ll take it,”  and store it in the wardrobe or something. But if they do take it and throw it with the luggage, I’m not too worried about it. You held it.

Chuck Wilson: Yeah, so I’ve never ever had an issue, or felt like I had to baby it, you know.

HGB: I see. That is truly one of the benefits of a headless guitar. The most vulnerable part of a guitar is the headstock because that’s the part that tends to crack.

Chuck Wilson: Yep, especially on the basses… when you’re gigging or touring or you’re on a bus, it’s always the headstock that breaks.

HGB: Yeah, and Les Pauls, it seems, are particularly vulnerable when it comes to guitars.

Chuck Wilson: Well, you mention Les Paul— if you look at a Gibson headstock too, you’ll see that here’s the nut, the strings [shows the angle string makes going through nut]… really weird angles. On any of my guitars, but especially the headless, it’s straight from the nut.

Chuck Wilson: In a race car, you don’t build brake lines running fluid to save your life and go like: “I’m gonna angle one and do this.” You go point A to point B. “Oh, we gotta make a little curve, okay, let’s start here and make it real gradual.” You can’t just go like this [shows sharp angle]. That’s a weak point. So yeah, you’re putting all that stress on the nut. I mean that’s another big plus for a headless guitar. You’re not dealing with all of that.

HGB: Yeah. The other thing is when you bend the string, usually you find that if it’s angled a lot, the note ends up being a little flat after you release it. You don’t have that issue when it’s straight.

Chuck Wilson: Well it’s just dumb. I don’t know why Gibson has never… I think they’re so concerned about how it looks, like: “This has been our head forever. We’re never going to change it, it’s Gibson.” Well that’s true, but it’s also kind of like, I thought of that, then I started reading at a forum where other guys are also talking about that. That it’s an odd design.

HGB: Yeah, but their headstock is a classic, nonetheless. I guess that’s the thing.

HGB: Who would you say are the most positive to the headless design, in terms of genre? Blues, rock, metal players… Is there any particular group that you notice gravitate more towards it?

Chuck Wilson: I would say to this point, rock. Which might be a little disappointing to me, because I mean, I love rock, but to me, it’s such a progressive-looking instrument that I think it deserves to be— and maybe in time it will be, more considered a virtuoso solo instrument. Here’s the reason why: You’re too young to know this, but Keith Richards of the Rolling Stones was busted. I think it was… was it in the US? I think it was in Canada, for marijuana when it was a big deal. So they made him do a couple of shows, which was smart, and all the money went to some charity. So I saw one of the shows, and it featured Stanley Clarke on bass. It was Keith Richards, Stanley Clarke, and I think it was Charlie Watts on drums. A killer, killer show, right? And Stanley Clarke was playing a headless bass. I’m in my 30s, or whatever, and just watching the cat play this thing, and he’s a virtuoso. So to me the headless… I guess I’m a little partial to it but I think it should be given more respect, and it should be more like progressive jazz bands. Oh, and you know reggae. I do see reggae guys play headless basses. So I’m interested to see if I’ll start getting some reggae connections and stuff. It seems to fit the vibe. I think the headless deserves to be avant-garde, if that makes sense. As far as the blues guys, they still want to play a Les Paul. There’s a certain stigma…

Chuck Wilson: Yeah, well not me, I’m a blues guy. But there’s a certain stigma that, you know, if you’re not playing this guitar, then you’re not really… doesn’t really matter how well you play. You just have to have the look. You could be horrible, and just look hard. So yeah, I think it’s… you’re selling a look. If that makes sense.

HGB: Yeah, so going off that question: What do you think the future looks like for the headless guitar?

Chuck Wilson: Well I’m introducing the Absinthe model, and I think the future is phenomenal. The Absinthe is not really a travel-size guitar, so it’ll have to stand on its own. It’s not gonna be in the genre of: “I need a travel guitar to travel with.” I think like anything it trends, you know, it cycles. And I think that we’re going to head into a big trend with progressive headless guitars and that they’ll do great. I think people are looking for something different, you know. As you become an older musician also, I look at something like ergonomics and weight. Like, people say: “Oh, I can’t believe that Keith Richards can play for two and a half hours. You know, he’s an old man.” But I would say: “I can’t believe he could play for two and a half hours with a heavy guitar on his back.”

Chuck Wilson: Yeah! Because hell, if I did that I’d be like: “Oh God!” you know, because it will hurt your back. Just to be in that position. It’s just not comfortable. When you’re in your 20s and 30s, like, who cares? It doesn’t matter. So I think that the headless guitar should always be lighter weight and they should always be progressive. I think that they’ll find or continue to find their own niche. And I think as we continue to see performing coming back [in reference to COVID-19 closures], hopefully, it’ll blow up.

HGB: Great, well thank you for this opportunity. As far as the upcoming model, the Absinthe, when can we expect to see its release?

Chuck Wilson: It’s currently in the final engineering stage. It’s projected to be available before the end of the year.

HGB: Looking forward to it!

To learn more about Bootlegger Guitar, head over to: bootleggerguitar.com

If you enjoyed this interview and have any comments/ questions, please let us know below! 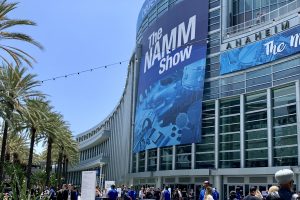 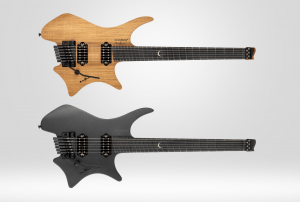 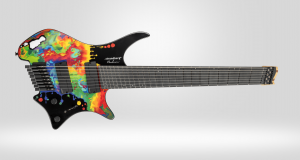 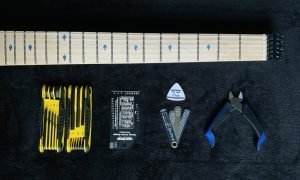 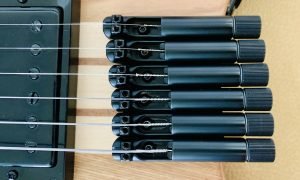 How to Set the Intonation on Your Headless Guitar/ Bass